Friday, the Richmond Ambulance Authority (RAA) announced the donation of one of its ambulances (Unit 85) as part of the “U.S. Ambulances for Ukraine” nationwide effort launched in March 2022 by Illinois-based OSF Healthcare Vice President of Government Relations, Christopher Manson. RAA partnered with the Virginia Hospital & Healthcare Association (VHHA), which coordinated medical supply donations from HCA Virginia, VCU Health, and the Northern Virginia Emergency Response System to stock RAA’s ambulance with medical supplies before its journey to Ukraine.

“For more than 30 years, RAA has built an international reputation and relationships because of its innovative approach to EMS, as we’ve helped healthcare workers across the world create similar EMS systems in their home countries,” said RAA CEO Chip Decker. “This felt like the perfect opportunity to help another nation in need with an innovative approach taken by Christopher and his supporters through an incredible effort we’re excited to be a part of.”

“Healthcare providers and organizations have a natural instinct to help people,” said VHHA President and CEO Sean T. Connaughton. “Typically, that involves delivering compassionate care to patients. That is one way to be of service to people in need. But it’s not the only way. Right now, the Ukrainian people face armed conflict on their soil. Thanks to the generosity of HCA Virginia, VCU Health, and the Northern Virginia Emergency Response System, we are delighted to be able to collaborate with the Richmond Ambulance Authority, ‘U.S. Ambulances for Ukraine,’ Senator Warner, Secretary Littel, and other partners to donate supplies to be sent to Ukraine to aid people impacted by ongoing hostilities in their homeland.”

“Throughout this war, the people of Ukraine have displayed incredible courage in the face of Russia’s unrelenting attacks. As we continue to offer assistance at the federal level, it is inspiring to see communities across Virginia step up to support the fight for democracy,” said U.S. Senator Mark Warner. “I applaud the ‘U.S. Ambulances for Ukraine’ effort for the key role it has played in getting these much-needed emergency medical resources to Ukraine’s front lines.”

“It is incredible to see Virginians leading the way in providing quality, accessible care to those in need,” said Virginia Secretary of Health and Human Resources John Littel. “I am humbled by the generosity of those who donated and inspired by the leadership of the Richmond Ambulance Authority.”

Manson was watching news coverage of the war in Ukraine with his 7-year-old daughter when she asked if there was anything they could do to help. Inspired by his daughter, Manson contacted the Ukrainian Consulate and asked if there were medical supplies his employer could donate. As he thought about the possibilities, Manson ultimately figured out a way to send an ambulance filled with supplies to the war-torn country. That idea has since evolved into “U.S. Ambulances for Ukraine.” Since then, the movement has grown and more than two dozen ambulances and medical supplies have been donated from agencies and organizations across the country. To date, the initiative has facilitated the donation and delivery of 18 ambulances to Ukraine along with two tons of medical supplies and equipment including 60 Automatic External Defibrillators (AEDs), and 100 Intravenous (IV) pumps. RAA’s ambulance is the 20th ambulance to be donated to the organization.

“The only way we can continue to do this is because of generous donations by entities like the Richmond Ambulance Authority and the Virginia Hospital & Healthcare Association,” added Manson. “These ambulances and medical supplies are desperately needed and I thank all those who donated for their generosity. My daughter, Lily, thanks you, too.” 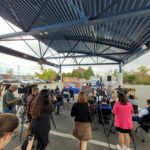 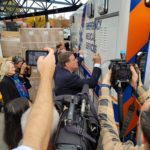 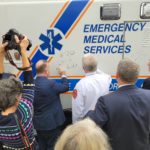 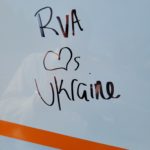 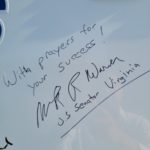 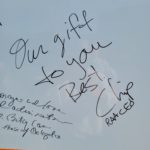 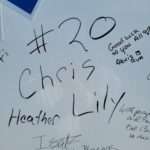 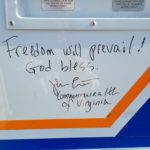 “Healthcare workers in Ukraine are risking their own lives for their calling to help others in times of need,” said Michael Roussos, president of VCU Medical Center. “VCU Health’s mission to preserve and restore health for all people extends beyond the commonwealth. Today’s event is a good reminder that when we come together in the spirit of our mission, we can have a greater impact to help our fellow healthcare workers in Ukraine take better care of those depending on them.”

“For more than two decades, NVERS has supported a collaborative response to emergencies and disasters in Northern Virginia,” said Kristin Nickerson, Executive Director of Northern Virginia Emergency Response System. “We recognize a community’s unique needs during an emergency, and our members are honored to contribute to this vital effort to help save lives and ease human suffering in Ukraine.”

“At HCA Virginia, we are dedicated to the care and improvement of human life, which extends to those impacted by the conflict in Ukraine,” said Dr. William Lunn, Chief Executive Officer of Chippenham and Johnston-Willis Hospitals. “We are honored to donate medical supplies to those in need.

RAA and VHHA are inviting members of the public to RAA headquarters until 5 p.m. today and from 9 a.m. – 5 p.m. beginning on Monday, November 7 through Wednesday, November 9 to write messages of support on its ambulance for the Ukrainian people before it departs for Ukraine on November 10.

About the Richmond Ambulance Authority: In 1991, the Richmond City Council and the City Manager implemented an Emergency Medical Services (EMS) system that placed the patient first and guaranteed its performance to the City’s residents. Today, the Richmond Ambulance Authority responds to nearly 200 calls per day and transports, on average, 150 patients per day. RAA is one of only 32 EMS agencies in the United States accredited by both the Commission on the Accreditation of Ambulance Services and the International Academies of Emergency Dispatch. RAA is also a Commonwealth of Virginia Accredited Dispatch Center. RAA’s staff has consistently received local, state, and national recognition for their work in EMS. In 2022 RAA staff members were recognized by the Old Dominion EMS Alliance (ODEMSA) in two categories at the ODEMSA Regional Awards.

About VHHA: The Virginia Hospital & Healthcare Association is an alliance of 110 hospitals and 25 health delivery systems that develops and advocates for sound health care policy in the Commonwealth. Its mission is to achieve excellence in both health care and health to make Virginia the healthiest state in the nation. Its vision is through collaboration with members and stakeholders, to ensure the sustainability of Virginia health care system, transform the delivery of care to promote lower costs and high value across the continuum of care, and to improve health for all Virginians. Connect with VHHA through Facebook, Twitter, YouTube, LinkedIn, and Instagram.