This article originally appeared on richmondfreepress.com

A Richmond woman who spends her days saving lives will be the grand marshal of the 37th Annual Richmond Christmas Parade, it has been announced.

She is April O’Quinn, an emergency medical technician with the Richmond Ambulance Authority.

Ms. O’Quinn will lead the televised-only parade from 10 a.m. to noon Saturday, Dec. 5.

“Ms. O’Quinn has such an inspiring story and embodies what it means to be a hero as a front line worker,” Ms. Karrer stated. “We are so grateful to April and all of the Richmond Ambulance Authority crew for their work in the Richmond community.”

This is just the latest recognition for Ms. O’Quinn, who battled back from contracting the coronavirus in March and continues to work as an EMT. 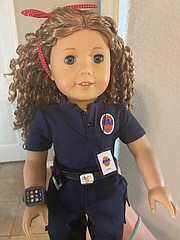 She was selected earlier this year to be one of the faces of a new line of “Heroes With Heart” dolls created by American Girl.

Ms. O’Quinn was tapped as one of the five winners after being nominated by her niece, Lacey O’Quinn of Texas. Lacey, who is 12, wrote the company’s judges about her aunt being a role model and inspiration through her willingness to return to the medical front lines after spending a month recuperating from the virus.