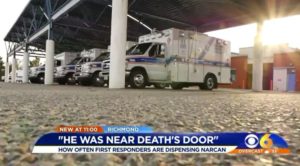 This article originally appeared in www.wtvr.com

First responders have administered the life saving drug Narcan to an increasing number of overdose patients within the past few months, according to new numbers released by Richmond Ambulance Authority (RAA).

Paramedics used naloxone on 64 patients in the City of Richmond in July 2018.

In August, the drug was administered to 121 patients who were believed to be overdosing.

That number rose to 130 patients in September 2018, according to the data.

Naloxone is a medication that can reverse an opioid overdose (i.e. prescription pain medication or heroin). When administered, the drug, also known by its generic name Narcan, blocks the effects of opioids on the brain and restores breathing within two to eight minutes.

Within the past few years, first responders administered Narcan to a growing number of individuals in order to revive them.

Narcan was used on 702 overdosing patients in 2016. That number climbed to more than 900 last year.

From January through October of this year, the life saving drug was administered to nearly 800 people.

“That’s scary in one city. That’s startling,” said RAA Capt. Wes Wampler. “It likely would be a poor prognosis for them without Narcan being on the ambulances and not readily available.”

It’s unclear whether the individuals who were given naloxone survived. The reason for the recent uptick is also not known.

Numerous state and federal lawmakers have called the issue an epidemic.

More than 1,200 people in Virginia died of opioid overdoses in 2017. One hundred of those fatal overdoses were in the Richmond area, according to the Virginia Department of Health.

VCU professor Dr. Marshall Brooks, who studies opioids and its affect on communities, described the act of overdosing as eerily peaceful.

“It’s a calm drug. That’s the deadliness of it that people don’t know they’re overdosing until they essentially just go to sleep. They stop breathing and that’s how you die,” Brooks described.

He witnessed firsthand an overdose on a busy West Broad Street block on a sunny Monday afternoon. The professor and father first noticed a crowd of people attempting to resuscitate the man who wasn’t breathing.

“The man was near death’s door. [Onlookers] were saying he wasn’t breathing,” Brooks remembered.

The overdosing man was seen on surveillance video inside of a nearby convenience store collapsing near the refrigerators, according to sources.

Luckily, a drug store is nearby the store where the man collapsed.

“The pharmacist administered it before the EMTs arrived so they were effectively the first responder, which was wonderful,” Brooks stated.

Brooks said more often than not an individual overdosing on drugs is alone.

“Because it was at a 1:30 on a Monday afternoon and downtown the man lived,” he described. “Most of those overdoses happen behind close doors in the dark by yourself and there’s no one to see you.”