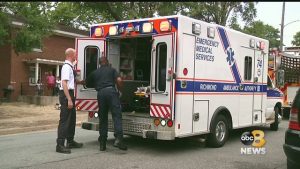 RICHMOND, Va. (WRIC) — The Richmond Ambulance Authority says it’s seeing an uptick in calls due to the hot weather.

It’s around 2 p.m. Friday afternoon and Richmond Ambulance Authority (RAA) is responding to a call for an elderly woman feeling dizzy, light headed and hot. When we get to the scene, emergency responders put her on a stretcher and into an ambulance.

She’s expected to be OK. Supervisor Wes Wampler says the woman recently had surgery. He says when people have any ailments it makes it harder to deal with the extreme heat.

“The body can’t compensate for that heat and losing all that water the heart does not respond to it well,” said Wampler.

It’s just one of a number of heat related calls the department has gotten in the past two days with the temps being so high. Thursday, emergency workers found a man near the river who had obviously been outside too long.

“He was disoriented, he was not sweating he was very, very altered,” said Wampler.

Officials say it’s best to stay out of the heat when it’s this hot, but if you have to be outside, be proactive.

“Try to get you work done in the early morning hours or later evening hours if possible. Try to work in shaded areas. Make sure you stay hydrated. That’s probably one of the best preventative measures and individual can take,” said Jason Roach with RAA.

Roach says in the past they’ve also gotten calls for kids and pets left in cars. He showed 8News how hot a car can get sitting in the sun. Inside one car he shows us it’s 125 degrees.

“And that could be very detrimental to your kid’s health and your pet’s health,” said Roach.

Roach says everyone can help by being aware of their surroundings.

“Just check on anyone you know that you feel could be at risk,” said Roach.

RAA also makes sure their staff is ok. They fully stock their coolers before they go out and bring staff back mid shift to cool off.

This article originally appeared in wric.com