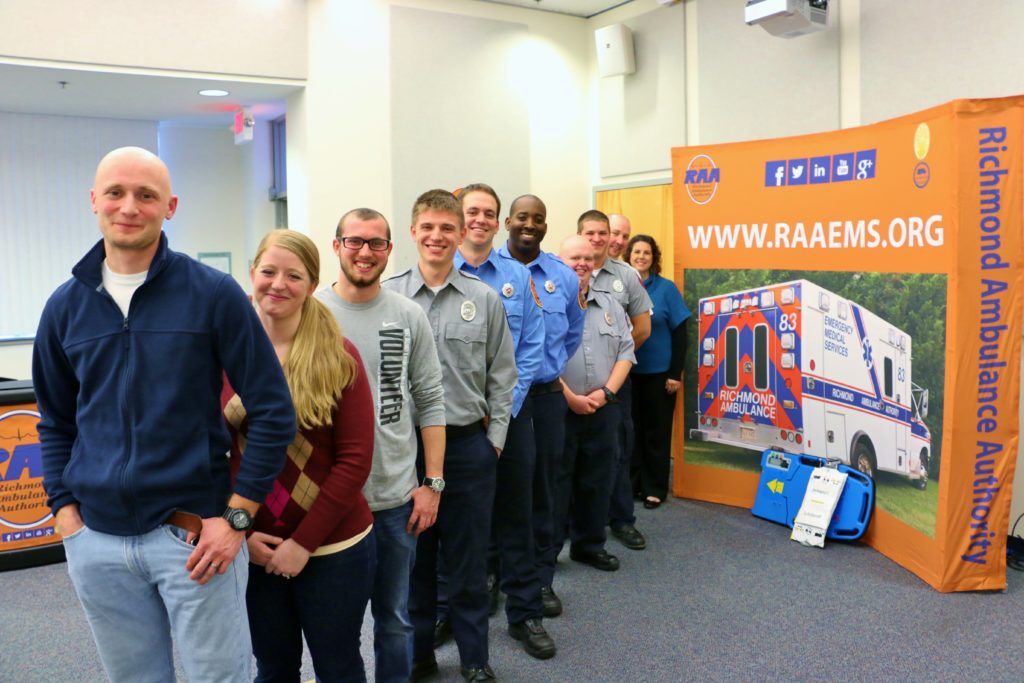 When Michael Snyder, Jr. suffered a sudden cardiac arrest last December at the age of 27, immediate action was taken by his family and soon thereafter, emergency services. All worked together to save his life.

Michael, his wife Jennifer, Jennifer’s brother and cousin had returned home after dinner out and Michael began to feel ill.  He asked his wife for a glass of water and when she came back, she found him slumped over and unconscious.  When his family dialed 911 and initiated CPR, they set in motion a life-saving process known as the ‘Chain of Survival.’   During the 911 call, Richmond Ambulance Authority dispatcher Travis Gortney gave CPR instructions while Richmond Fire’s Quint 18 and a paramedic crew from the Richmond Ambulance Authority responded to the scene.

Upon arrival, the firefighters took over CPR for a short time and then transferred care to RAA paramedic Alex Klimenko and Emergency Medical Technician Jonathan Carroll. Klimenko placed a mechanical device called AutoPulse on Michael, which delivers automatic CPR at both the correct and consistent rate, while he began delivering Advanced Life Support.  In addition to receiving defibrillating shocks and drugs, Snyder was also placed into a state of ‘Therapeutic Hypothermia’ in which the body temperature is cooled down to preserve brain function.  With Michael’s heart restarted, medics and firefighters carried Michael on an evacuation stretcher down three flights of stairs to the awaiting ambulance.

“They gave me back my life,” said Snyder.  “I have a two-year old little girl and every step that everyone involved took gave me more time with her.  My family is so strong and they acted quickly and never gave up on me, and the EMS responders and hospital staff were incredible.  The odds of me waking up alive and as the same person mentally and physically were so extraordinarily low.  It’s just amazing.  You can’t put a price on that.”

Jennifer Snyder agrees.  “The ambulance arrived in no time.  They were so professional and helped me calm down and focus so I could communicate important medical information.  Everyone did an outstanding job from beginning to end.  The RAA medics were truly above and beyond – as was the VCU team – and we are so grateful!”