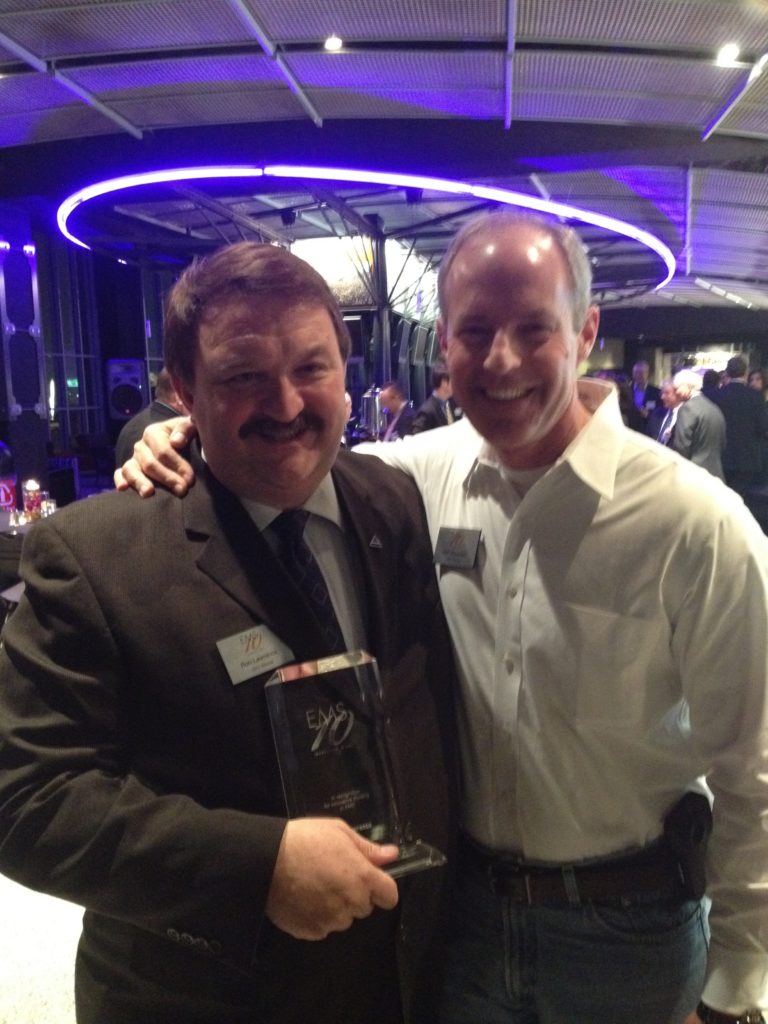 Rob Lawrence, Chief Operating Officer of the Richmond Ambulance Authority (RAA), has won a prestigious EMS10 Award.  This award, presented at the 2012 EMS Today Conference by the Journal of Emergency Medical Services (JEMS), recognizes 10 individuals who have contributed to EMS in an exceptional and innovative way.  Lawrence was chosen for spearheading RAA’s launch of the Rider Alert motorcycle safety initiative in Virginia in April of 2011, in partnership with Bon Secours Virginia Health System and Motorcycle Virginia.  The program has since spread across the United States and is launching in Sweden this month.  Lawrence was nominated for the EMS10 by Matt Zavadsky, Associate Director of Operations of Medstar EMS in Fort Worth, Texas.  “It was an honor to be able to nominate Rob for this prestigious award,” said Zavadsky. “His Rider Alert program has not only benefited the EMS profession, but motorcycle riders across the country.  As a motorcycle rider and an EMS professional myself, I salute Rob for his outstanding work on this initiative!”

Designed to help save lives, Rider Alert provides free identification data cards to motorcyclists in order to help first responders provide rapid and accurate medical assistance if the rider is in a serious accident.    The data cards are placed inside riders’ helmets and contain vital, life-saving information, emergency contact and any important medical history. When first responders arrive on the scene of a motorcycle accident, a one-inch, round sticker on the outside of the helmet will indicate that the biker has the Rider Alert card. The sticker also warns bystanders not to remove the helmet as this should be done by trained medical personnel only, to prevent further injury.

Lawrence based the idea of the Rider Alert cards on a program called CRASH Card which was developed in the United Kingdom by the Ambulance Motorcycle Club.  Initially the CRASH Card program began as a small project, but quickly grew in popularity.

“It made perfect sense to launch a similar program here in the United States, and we are elated by how rapidly Rider Alert is spreading,” said Lawrence. “We distributed 125,000 Rider Alert cards in five states in the first 10 months.  Rider Alert Sweden goes live this month and work is ongoing with the Blue Knights Motorcycle Clubs of both Canada and Australia to launch the program in their countries.  Needless to say, I am honored to be named among the EMS10 and deeply appreciate the recognition of Rider Alert’s positive impact by fellow EMS professionals.”

Rider Alert has also received sponsorship from the American Automobile Association (AAA), Geico and PHI Helicopters among other organizations and today, in Virginia, every newly licensed motorcyclist is issued a Rider Alert card by their instructors.  The Federation of International Motorcyclists (the group that organizes and runs motorcycle Formula One racing around the world) is also interested in adopting the program.

“Rider Alert has already helped our medics and local emergency department personnel successfully treat motorcyclists who have crashed here in Richmond, and we’re getting word of other similar situations throughout the state,” said Chip Decker, CEO of the Richmond Ambulance Authority. “We’re proud of Rob and the positive impact that Rider Alert is making here in the Commonwealth of Virginia and beyond.”

Rob Lawrence came to the United States three years ago to work for the Richmond Ambulance Authority.  Prior to that, Lawrence was the Chief Operating Officer for the English County of Suffolk as part of the East of England Ambulance Service.  A graduate of the Royal Military Academy Sandhurst, Lawrence’s first career was as an active duty officer in the British Army, where he served in the Royal Army Medical Corps all over the world.  In the rank of Major, Lawrence completed a NATO exchange tour with the Canadian Army at the Canadian Forces Medical School in Ontario, which was his first wholesale family migration over the Atlantic.  After a 22-year military career in many pre-hospital and evacuation leadership roles, Lawrence joined the National Health Service, initially as the Commissioner of Ambulance Services in the East of England.  Shortly thereafter, he joined the East Anglian Ambulance Service as Director of Operations, which later merged into the larger East of England Ambulance.  Lawrence has spent both his military and civilian career developing and leading high performance pre-hospital emergency and medical teams.
About the Richmond Ambulance Authority

In 1991, the Richmond City Council and the city manager implemented an Emergency Medical Services (EMS) system that placed the patient first and guaranteed its performance to the City’s residents.  Today, the Richmond Ambulance Authority responds to approximately 135 calls per day and transports, on average, 110 patients per day.  RAA’s emergency response times are among the fastest in the nation with ambulances on the scene of life threatening emergencies in less than 8 minutes and 59 seconds in more than 90% of all responses.  RAA is one of only 11 EMS agencies in the United States accredited by both the Commission on the Accreditation of Ambulance Services and the National Academies of Emergency Dispatch.  RAA is also a Commonwealth of Virginia Accredited Dispatch Center.  For more information, see raaems.org.